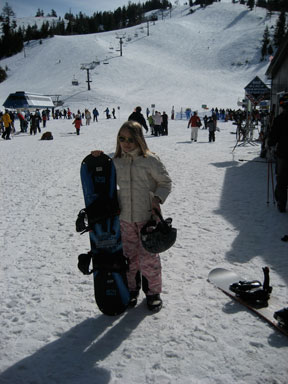 A few weeks ago the Boise valley had a tremendous amount of snow… enough so that the school districts called a snow day. I had to pick up Sierra (my daughter) and we came home to play in the snow. She was really excited to do a little sledding on the tiny hill in our subdivision, but didnt have snow gear. We stopped on the way home to pick up some boots and snow pants (pink camo, of course).

Anyways, she got pretty bored with the standard sledding routine of sitting in the sled and going down the hill, so pretty soon, she was standing on the sled as she went down the hill. To be honest, I was really surprised at her natural talent. She’s usually kind of klutzy, but she did not fall over. Once she got to the bottom of the hill, she came up and did it again.

That got me thinking… maybe she and I should take a snowboard class together. I’d only been a few times, but really had fun and she looked like she was having a blast riding a sled down the hill.

Well, earlier today, we went. All I can say is, Sierra is a stud… Originally, I’d booked a one-hour class for us, but she was insisting on extending the lesson for another hour. She was on her board for two hours, and by the end of it, she was linking turns together and making it down the beginner chairlift.

A little lunch in the lodge, and she was ready to call it a day. She slept pretty much the whole way home.